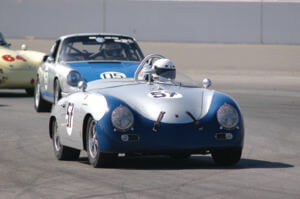 Lyon Air Museum, a world class showcase of historic aircraft and vintage automobiles, to host exhibit, “Vintage Motor Racing – with a Special Tribute to Dan Gurney.”  Nine breathtaking examples of race cars that made motor racing history will be presented alongside historic aircraft, July 1 – September 3, 2018 at the Museum, located on the west side of John Wayne Airport in Orange County, California.

Auto racing continues to be one of the world’s most popular spectator sports, with millions of enthusiastic fans attending racing events around the world every year. With humble beginnings dating back to the advent of the automobile itself, the sport has grown into an integral part of our global culture.

Dan Gurney remains one of the most significant drivers, constructors, and team owners in auto racing history.  Getting his professional start in driving after returning home from the Korean War, he quickly racked up numerous victories, including four Formula 1 races and two 2nd place Indy 500 finishes, as well as overall wins at prestigious races such as Daytona, Sebring, and Le Mans. Dan’s win of the 1967 Belgian Grand Prix at Spa in the Gurney Eagle Weslake V12 racer, built by his own company, All American Racers, remains the only time an American-built car driven by its American designer occupied the winner’s circle of a Formula One World Championship event. A week later, after winning the famous 24 Hours of Le Mans, Gurney started the racing tradition of spraying champagne on the winner’s podium.

Amongst the cars showcased during the special exhibit will be two Gurney Eagle Indy cars, representing All American Racer’s successful chassis campaigned at the 1968 and 1972 Indy 500. Also on display will be Dan Gurney’s personal 1963 Shelby Cobra, configured like that of the race car he drove at the 12 Hours of Sebring in 1963.

In addition to the iconic Gurney race cars, among others, will be a 1927 Bugatti Type 35 Grand Prix racer, a rare 1965 Alfa Romeo TZ2, a 1957 Porsche 356A Speedster, 1961 Porsche Abarth driven by Gerhard Koch to the German GT Championship in 1962, and the 1973/74 Kremer Porsche Carrera RSR that achieved the 1973 GT class win at the 24 Hours of Le Mans, with an incredible 8th place overall. These are truly rare and exceptional automobiles that are as timeless as they are beautiful, with many of them maintained in racing condition and still successfully competing on the historic motor racing circuit.

Lyon Air Museum represents the realization of a dream of founder General William Lyon.  As a former combat pilot, and ultimately Chief of the U.S. Air Force Reserve from 1975 to 1979, his passion for aviation history and youth education is the driving force behind Lyon Air Museum.  In establishing the Museum, General Lyon has created a world-class facility, offering educational tours and displays to inspire young people.  The Museum has on exhibit some of the world’s rarest operational historic aircraft and vehicles.